Not official yet, but since ticket sales have started I thought I'd put this up as a 'rumour'... 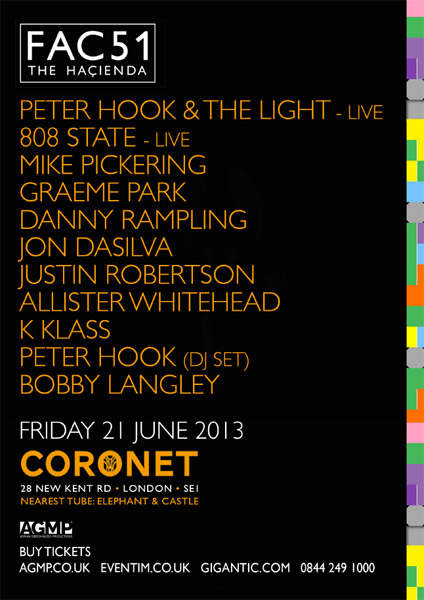 Press release for the gig:

Mixing a fully live event with a late club show across eight hours, FAC 51 The Hacienda follows its KOKO Christmas show with a special midsummer event at The Coronet, London Friday June 21st which recreates the spirit and unique atmosphere of The Hacienda with a selection of live bands and the clubs most famous DJ’s.

Legendary DJ partnership Graeme Park and Mike Pickering playing together at the top of the bill for the first time in London in many years, joined by a line up of names synonymous with The Hacienda including the Capital’s own Danny Rampling, Jon Dasilva, Justin Robertson, Allister Whitehead, K Klass, Peter Hook (DJ Set) and Bobby Langley.

The Light received great critical reactions for their sold out London debut in January, performing “Movement” and “Power, Corruption & Lies” in full. For The Coronet show, The Light are to play a more electronic derived set including the classics “Everything’s Gone Green”, “Temptation”. “Blue Monday”. “586” and more.

Also playing live in London for their first time since January 2012, 808 State will delve into their extensive repertoire, including such tracks as “Pacific State”, “In Yer Face” and “Cubik” as well as airing lesser known and brand new material in their live set, whilst Hacienda Records’ hotly tipped Super White Assassin open up for both.

With the highest standards of sound and lighting set for the event at The Coronet and only The Hacienda’s second London event in twenty years, Hacienda London in June looks to be marked out as THE club and live event of the summer.

Please bring ID as this may be required on entry.

Who went to the last Hacienda night? And was it any good? I am wary of southerners who do not get the madchester scene, and would hate to turn up to an empty club with no atmosphere...

Recommended to buy tickets now or just pay on the door?
Top

Do you have any idea what time who is playing?

My brother just rattled of the times each dj/band was on via some site he found (said Hook & Lights 11 and 808 midnight), but there was no mention of K Klass? Do you know if they are playing?

So looking forward to The Lights New Order set...

wouldn't mind hearing some 808 Newbuild stuff either...should be a good night! I went to the Manchester Hacienda 3 times in 90/91. Loved it, great place, good old sweat on...used to go to the Glasgow Hacienda every 2 weeks...so this is a step back in time

Might just have a wee power nap before I get ready....old age you see

I'm just home, no sleep, went to my mates house, gotta love a stereo with usb hub! Just rocked State to State 2 thanks to my Iphone and usb

Could not resist it, just before going to sleep put STS3 on my headphones....KABUKI DISCO....dancing like a mad man in the comfort of my own home

Great to see you, G - I was a bit worse for wear, and only stayed for about an hour afterwards before heading back to the hotel!

I throughly enjoyed the set - nice to hear Lift, Invader and Quincy again (missed off Bristol due to set times)...

Setlist (in no particular order):

(San Francisco was due to be played, but was left out)

[I *think* I've remembered everything?]