https://www.mixcloud.com/otwradio/808-s ... -the-wire/
A recording of The On The Wire Christmas Party has appeared on Sound Cloud .
(Thanks to Nick for pointing this out)
I guess this was possibly broadcast at the time . seems like a desk recording.
first track sounds like a version of" Control" (ref State to State 1 cd).
Starts out with 808 State which is probably the tale end of a longer jam ,You can here the spin masters coming in as a DJ set at 8 mins playing Let Your Self go (probably a white label).Gerald s first tune seems like it has MC Zipper from Foot Patrol (a dance crew from Moss Side).
(A studio track called Foot Patrol exists with the same bass line) ,sounds like Chapter and the Verse are helping out (piano).
at 16 mins a version of Blow your House Down , by Gerald./fades out ,( Steve Barker mentions Spin Masters DJ ing ) 808 State return with a version of
Compulsion (well the vocal sample at least) at 18 mins sounds like Raagman rapping over it.At 24.20 mins It returns to Geralds set and Voodoo Ray
which sounds like it has both live and sampler vocals.. Its possible that the timeline is cut up for the radio broadcast.
Anyone remember anything from the time ? Tackhead were on? ..I seem to remember another OnThe Wire gig at The Ritz with Neneh Cherry being on the bill.

Excellent rundown of the recording (I knew that obviously 808 were on at the start and Gerald on at the end, but I just assumed that was that with no Spinmasters/return of 808 live in between)!

Although not credited on the flyer, I've got it down as being with 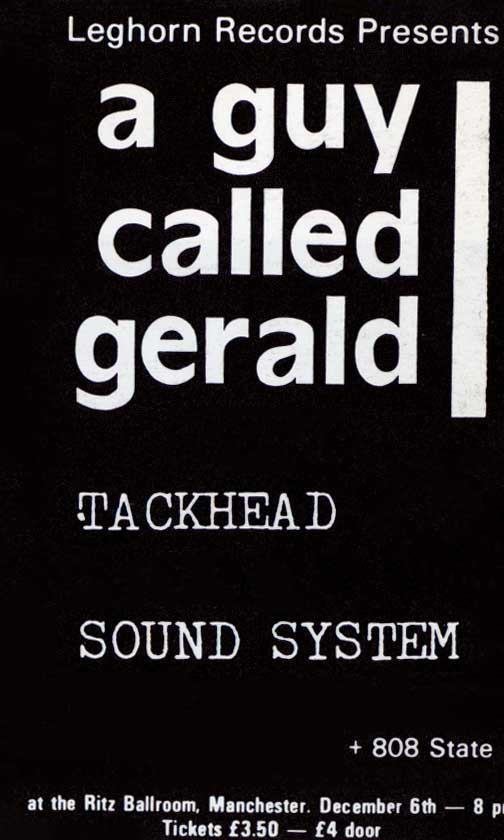 However, I seem to remember that I'd originally put down a separate Ritz/On The Wire gig with Neneh Cherry and merged the two?

If anyone was there, can they remember?