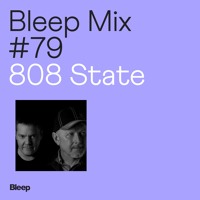 Here's an album review by Bleep too:

"There is something so right about 808 State making a long-overdue return in 2019. Due to the work of revivalists like Special Request, the acid, hardcore, ambient house and proto-junglist sonics that are synonymous with the group’s late-80s/early-90s heyday are back in vogue once again. As such, it feels fitting that a group who remain so influential in the sound of British club music should make their presence felt once more.

That said, 808 State deserve credit for not simply sticking to their guns here. While many acts reform to simply warm up the sounds of their heyday, Transmission Suite is a record which builds on the group’s previous output in an intriguing manner. Anchored by a plethora of rhythms made by the TR-808 drum machine from which 808 State take their name, Transmission Suite moves across a wide array of leftfield electronic sounds.

The weirdo-beat of acts like Modeselektor and Mouse On Mars is what springs to mind most readily when listening to many of the tracks here. Other cuts touch on more recent trends - juke and neo-IDM, for instance - while maintaining a distinctly experimental bent. Even the likes of ‘Skylon’ and ‘Ujala’, tracks which hark back to the harmonic richness of 808 State’s golden age, forge something new from old wares. We’re not in The Hacienda anymore, Toto - and given how this means that 808 State are making music more fresh and experimental than many of the young pretenders, this can only be a good thing.

A full seventeen years on from their previous LP and three decades after ‘Pacific State’ made them famous, 808 State get back to business on their new album Transmission Suite."

"Here we see acid house legends 808 State collating a masterful collage of influences from artists such as John Cafe, Hawkwind and Herbie Hancock all the way through to contemporaries such as Lone, Yak and Mark Pritchard alongside many 808 State productions and tracks from associated Graham Massey outfits Toolshed and Biting Tongues."

"Scroll down to also read our exclusive interview with the group."

Bleep: Can you tell us about the early days of 808 State, how you formed and the involvement Eastern Bloc records had in the group?

808 State: Eastern Bloc had started as a group of lads from Bolton that set up a market stall selling vinyl in a disused department store known as Affleck's Palace. It had a Camden Market vibe - second-hand clothes, posters, hairdressers & cafes.

Things went well and they moved on to the storefront of the building in the late 80s. The shop mostly dealt in indie music at the time but started to swing toward dance imports as acid house started to emerge.

808 State’s first manager was a guy called Ron Atkinson who did a lot of the importing and distributed to the northwest shops in his big white van. Spin Inn was the main shop in Manchester that dealt in US imports at the time. There was some rivalry to get the limited supply of the new sounds. I was running a cafe across the road at the time when I met Martin, I was just about to start a sound engineering course at The School Of Sound Recording a few blocks away. People would bring in demos for Martin to listen. We started a little production team to start recording some of them.

Our first EP was a set of hip hop tracks that included The Scratch Beat Masters which was A Guy Called Gerald and MC Tunes. We were organising Hip Hop club nights at The Boardwalk club in Manchester and that’s when we started doing some acid jams as State 808. We piled into the studio in January 1988 to record an album in a weekend - that was our first LP ‘Newbuild’. John Peel used to come up to MCR a few times a year to shop for new records, he used to hold a surgery in my cafe, he also spent time in the basement at Eastern Bloc and Piccadilly Records. We gave him a copy of Newbuild and he kept getting requests for it. Eastern Bloc sponsored the 808 State radio show on Sunset FM, there was a top 10 each week, people taped the show and often brought cassettes of it back to the shop to identify tunes. A nice little arrangement.

Where do you stand in the vinyl vs. digital debate? When DJing do you still play physical records?

I think we are both digitally minded. I know Andrew sold his collection to a shop in Newcastle a few years back, I think he still burns CDs, a lot of people do. I’m pretty much a computer DJ, though there is a night called One Deck I sometimes do, run by The Una Bomber crew. That’s around the corner from my home so I drag vinyl there in a drum case. I also use vinyl on my “Jazz Cruise Lifeboat Assembly” show on Reform Radio - because there’s still loads of undigitized jazz. I’m too messy to be an audiophile, my records are generally ragged. Though I appreciate it when people get that stuff together. We shared some space with Mr Scruff in recent years, he’s very meticulous about his equipment and decks, I respect that. I’m beginning to look after my vinyl a lot more these days. It hurts that when you have put so much work into getting the sound right and someone smashes it into an mp3 through some crap system, but you almost have to try and make music that bombproof.

Are there any recent releases that you particularly like playing out - any of which on Bleep of course?

I generally like anything Mark Pritchard gets up to - I love that new TNGHT track Serpents managed to play that at lunchtime on Mary Anne Hobbs the other day. There’s some stuff I like on R&S these days like Blawan & DJrum, I seem to have a few Yak and Joe tracks that fit my thing. But if I really like a track it will stay in my list for decades.

Tracks like 'Pulcenta' and 'Carbonade' still sound very hardware driven. Can you outline some of the equipment used on Transmission Suite? Have there been any major changes since the early days?

Well spotted - the whole album is very outside the box - setting up systems using step sequencers and drum machines driving the synths, which is how we started out 30 years ago. These days it’s easier to sync everything up, I got a clock called the Sync Gen Pro after chatting to Samari from Swing Ting in the pub. Now everything clocks real tight. A few years back me and Gerald were doing some of those Rebuild acid jams to support 808 The Movie - The Roland AIRA team were letting us in early on that gear as it was developing, also feeding back ideas into the boutique range - so there’s a lot of AIRA on the record mixed in with original gear. See if you can tell what’s what. I love the Beat Step Pro as a sequencer, I’ve been hooking that up to old synths like the SH09 and ARPs Jupiter 8 is always there. We did Moog Fest a couple of years back and did a set of presets for the Moog Subsequent, that features heavily both as a sound source and as a sequencer. I fell back in love with the Sequential Circuits Pro One after getting the U-He Repro One as a plugin - they're both chundering away, again I’ve forgotten which one is which. Their album was compiled from over 40 tracks - in the process of compiling it became very purely electronic. There was a lot of real instrumentation on the other material - Vibraphone, Woodwinds, real drums, guitars, organs. I hope some of this will emerge down the line.

Some of the Biting Tongues material has recently been comped and reissued by archive labels such as Finders Keepers and The Tapeworm. Are there any labels that you currently rate either putting out new music or curating reissues of past material?

There are two Biting Tongues albums that have been compiled and mastered; “Live It” was a lost album we did for New Hormones Records in 1981, it only ever came out on cassette and it had a lot of spare unreleased tracks. I always thought it was our best studio album, so I’m relieved to get this into the world, it’s very dear to me, music like that comes once in a lifetime.

However, when someone asked us to reform for a gig at the ICA in 2003 - we came back stronger than ever. Touch (Tapeworm People) are releasing a live compilation from that period. ICA / Shunt Vaults / Islington Mill / Plan K Brussels) it’s called “Clear Your Screens” and it’s all early material with Ken Hollings fronting the band. Mixing it made my blood boil - literally made me shake, it’s like half audiobook, half exorcism.

What was the inspiration for the cover artwork? Where does this come from?

The inspiration for the artwork is the building that we made the project in Old Granada Studios on the banks of the River Irwell in Manchester. The TV studio complex was built in the 1950s and then fell into disuse in the early 2000s. We took over The Transmission Suite for a couple of years - essentially the TV Mix room with a wall of 80 cathode ray tubes and racks of unknown blinking equipment with beautiful bespoke 50s furniture. We filled it full of our gear and it became the ultimate man-shed. It was crap for mixing as it was a glass box the size of a tennis court. We did the final mixes in Courtyard Studios up the corridor in the same building.

Vaseem Bhatti has designed the cover and done all the graphics, Michael England has done the gatefold shot of the studio. I wanted something like the back of Herbie Hancock's Sunlight album. He was in there for a week photographing and filming. Watch the Tokyo Tokyo video to see some of the results of that. I’ve written some extensive sleeve notes that explain the cultural significance of that building, it’s a third member of the group.

Final track 'Crab Claw' features what sounds like a mixture of programmed and live drumming - can you tell us a bit about writing this?

It’s actually all programmed, the drum sounds are coming from a drum rack called an Alesis DM 4 and the kits change on the dial every few bars. The synth is some nasty little VST plug-in from yesteryear called ‘Claw”… this track has been hanging around for about 15 years, it’s a bit of a one liner but I’m very fond of it.

For years 808 State have used live drumming in our stage show. I love the energy it brings, you need a really tight drummer - Carl Sharrocks is that man. Fitting this new album in with the older material may well be challenging… working on that at the moment!
Top