Most histories of the acid house scene start down south – with Danny Rampling, Nicky Holloway and Paul Oakenfold's revelatory trip to Ibiza, and the foundation of London club nights like Shoom and Trip. But the North was already wise to acid house. The latest imports from Detroit and Chicago were already making it to more clued-in Northern dancefloors, and come 1988 a variety of groups across Manchester, Sheffield and various satellite towns were making a bold new electronic music that was certainly inherited from Stateside acid house, but boasted a new UK sensibility.

One of those groups was 808 State. A Manchester trio formed by Graham Massey, Martin Price and "A Guy Called" Gerald Simpson and named after the Roland TR-808 drum machine, their debut album Newbuild perfectly captured the nascent, hardware-powered acid sound, while their 1999 single Pacific State became a foundation stone of the chill-out genre. In 2005, Newbuild was re-released on Aphex Twin's Rephlex Records, Richard D James declaring that 808 State "was the next step after Chicago acid, and as much as I loved that, I could relate much better to 808 State… it seemed colder and more human at the same time."

808 State are true raver survivors. With a seventh album, Transmission Suite, on shelves and a 2020 tour on sale now. Today, though, Graham Massey is looking back to the seminal acid house and electronic records that came from Northern England throughout the rave years. "There was a lot of talk about a North/South divide," he recalls. "It all seems like a weak argument now as the country and indeed the world became in sync with these 'repetitive beats'. We were all inspired by the new electronic music from Chicago and Detroit, and then local records started to grow in the soil of the nightlife. Here are some that I remember sprouting up in the grim North at the time." 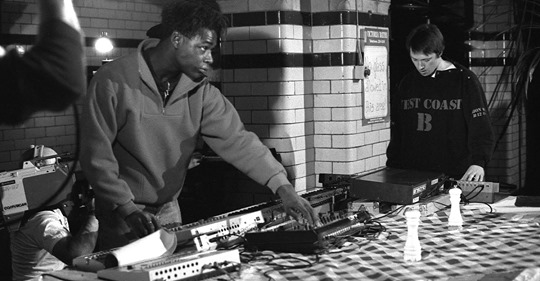