Discuss non-musical topics that are not related to 808 State or music.

Nothing to do with me but I'm going to promote it anyway.

Shake The Disease used to hold the best old skool nights I've ever been to called Lets Go Back in the Riverside Club in Glasgow. Guests such as Marshall Jefferson, Alex Paterson, SL2, NJOI, K-Klass, Farley Jackmaster and of course 808 State DJs amongst others

Shake The Disease!!!Ain't that a Depeche Mode song?!

canadian state of 808 wrote:Shake The Disease!!!Ain't that a Depeche Mode song?!

It is indeed.
Top 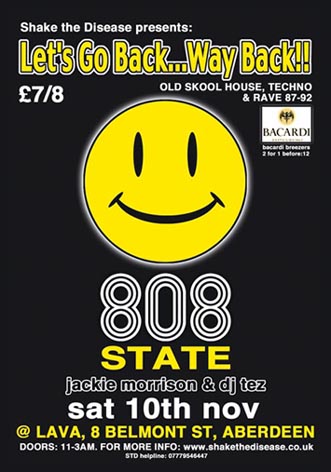 Of course! I thought I remembered it from somewhere.
Top

I remember that gig, especially the morning after meet-up in the Frankenstein pub with a hangover!

They're back, 10th Oct, this time in a Glasgow warehouse (What a venue, trust me).

This time with Terry Farley

Return to “Off Topic”